The workshop was an excellent opportunity to learn collectively from what the organizations are doing and the context where they work in the bay area. We´d like to share some of the Pop Ed breakout groups we facilitated on that occasion.

On the critical thinking, the workshop started with a "cuchicheo" a type of brainstorming session about what is going on in terms of Immigration reform. Afterwards, Oscar Chacón, NALACC´s Director shared a unique perspective (NALACC´s perspective about the so far failed process of immigration reform)

PECI participated on this section facilitating some participatory appraisals: 1. The time line of immigration reform. 2. The immigration reform energy fields and 3. The Social tree of Immigration Reform. Those three breakout groups are popular research tools to analyze local context. In this case, centered on how the current effort for immigration reform has been expressed in the bay area.

Time lines are very popular in Pop Ed workshops. Nevertheless, this one has some particular details that make it very interesting: on the top of it are listed the "immigration oppressive events"(red ones) of the last year and half. At the bottom, the "resistance events" (green ones) or organized actions against that repression and in favor of immigration reform. Additionally, the dotted lines indicate the tendencies through times. Thus in both cases, repression and resistance, the tendency has been variable.

The social tree is a very well known Pop Ed analytic tool. Using the metaphor of a tree´s structure and functions (roots: nutrients, trunk: sustain, foliage: breathe) the participants analyzed the dominant (on the right hand side) social forces that oppose to immigration reform and the progressive (on the left hand side) groups that supports immigration reform. On the roots the groups identified the economic groups and organizations, on the trunk the institutions and organizations that sustain the local society and on the foliage the dominant and counter-cultural ideas, values, mass media and cultural organizational from the region.

The participants also worked with "the energy fields" a variation of SWOT analysis. This Pop Ed technique helps to identify the different forces (internal and external) that have affected the process of immigration reform. The internal forces are strengths and weaknesses and the external (opportunities and threats). In addition, the length and width of the arrows indicate which ones are the most and least important.

PECI´s Isabel Vinent shared some of the theory related to the processes of raising the critical awareness, based on Paulo Freire´s ideas. who was a Brazilian Pedagogue and an Education Philosopher considered the intelectual father of Pop Ed. Take a look at Isabel Vinent explaining those ideas:


Finally, Roberto Lobato from Presente.org one of the co-facilitators, with what could be called the "The media map" which help participants to identify, and being aware, of the different and indeed vary media that the organizations use for share and communications their actions in favor of the Immigrant Community. This tool, original from PECI, is very visual and makes participants realize how interrelated are the mass media nowadays, and more importantly, the current and even increasing importance of cell phones in social activism.


Throughout the workshop, both Isabel Vinent and Reca Fernandez facilitated different "ice-breaker" and "energizer" exercises which brought funny moments to the event and at the same time more opportunities to share and know each other.


Take a look at Isabel Vinent facilitating a funny "energizer" to learn names and also to energize people after lunch.


Different images of the workshop: 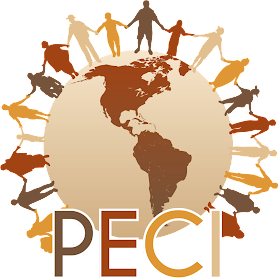